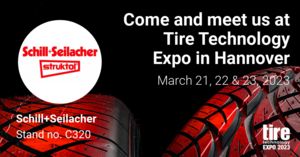 We are looking forward to meet you again... 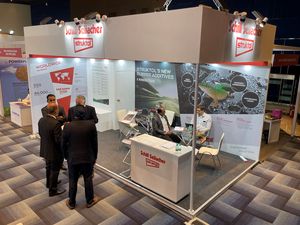 It was a great pleasure for us to meet our customers again on the occasion of the IRC India 2022,

in Bengalura Convention Center during Conference and Expo from November 24, to 26, 2022. We truly enjoyed meeting you

and thank you for the great conversations.

Hopefully we meet each other soon again. To learn more about our new products visit us at our booth 9/313 at DKT IRC 2022 in Nuremberg.

MANDREL RELEASE AGENTS ARE SYNTHETIC LIQUID LUBRICANTS THAT DRASTICALLY REDUCE
THE FRICTION BETWEEN AN UNCURED HOSE AND MANDREL, AND AFTER CURING BETWEEN THE
VULCANIZED HOSE AND HOT MANDREL... 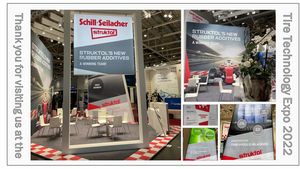 We very much appreciated meeting customers and partners again personally and are looking forward to further good discussion and exchange in the near future.. 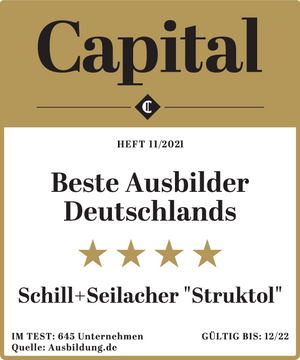 having received the award "Beste Ausbilder Deutschlands"  given by the business magazine "Capital".

We take this award as a confirmation, that our job training for our personnel is recognized to be very effective even with difficult conditions like in the past two years and meets highest demands so that young professionals get best instruction to be prepared for requirements of their future jobs. 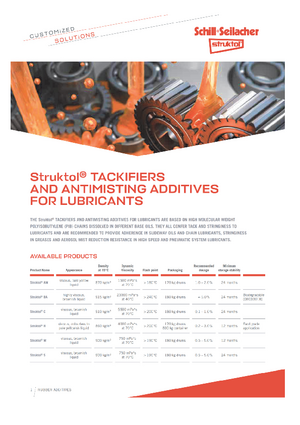 ANTIMISTING ADDITIVES FOR LUBRICANTS ARE BASED ON HIGH MOLECULAR WEIGHT POLYISOBUTYLENE (PIB) CHAINS DISSOLVED IN DIFFERENT BASE OILS. THEY ALL CONFER TACK AND STRINGINESS TO LUBRICANTS AND ARE RECOMMENDED TO PROVIDE ADHERENCE IN SLIDEWAY OILS AND CHAIN LUBRICANTS, STRINGINESS IN GREASES AND AEROSOL MIST REDUCTION RESISTANCE IN HIGH SPEED AND PNEUMATIC SYSTEM LUBRICANTS. She lost the fight against her serious illness at the age of 87, but thanks to her impressive life's work and her far-sighted succession planning, she secured an afterlife for future generations, which the Ingeborg Gross Foundation will preserve and implement. Ms. Ingeborg Gross was a strong entrepreneur.

She had no commercial training. But a feeling for business - and for people.

She has entrusted the foundation named after her and her long-term managing director with the preservation and implementation of her will. This laid the foundation stone for a secure future of the Schill + Seilacher Group, for the benefit of those who work for the company and for the common good. Just as she wanted it to be! 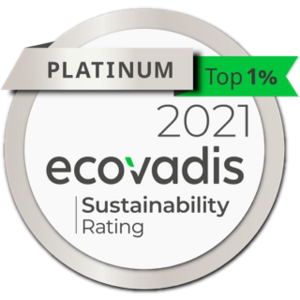 about having received EcoVadis Platinum Medal as a confirmation for successfully implementing, optimizing and following sustainablility requirements in their processes.

Schill+Seialcher "Struktol" GmbH is proud having improved further which lead to achieve Platin-Status. We are now among best 1 percent of all rated companies! LATEX THICKENING AGENTS ARE USED TO INCREASE AND ADJUST THE VISCOSITY OF LATEX MIXTURES FOR A VARIETY OF APPLICATIONS. THEY ARE, FOR EXAMPLE, ADDED TO LATEX COMPOUNDS USED FOR THIN FILM OR SHEET PRODUCTION TO INCREASE FILM THICKNESS AND PREVENT STRIKETHROUGH INTO FABRIC LAYERS. 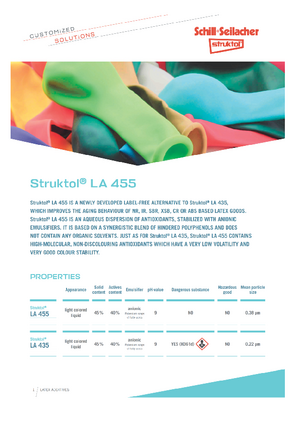 WHICH IMPROVES THE AGING BEHAVIOUR OF NR, IR, SBR, XSB, CR OR ABS BASED LATEX GOODS.Struktol® LA 455 IS AN AQUEOUS DISPERSION OF ANTIOXIDANTS, STABILIZED WITH ANIONIC EMULSIFIERS. IT IS BASED ON A SYNERGISTIC BLEND OF HINDERED POLYPHENOLS AND DOES NOT CONTAIN ANY ORGANIC SOLVENTS. JUST AS FOR Struktol® LA 435, Struktol® LA 455 CONTAINS
HIGH-MOLECULAR, NON-DISCOLOURING ANTIOXIDANTS WHICH HAVE A VERY LOW VOLATILITY AND VERY GOOD COLOUR STABILITY. PERMALEASE PERFORMANCE IS INFLUENCED BY MOULD SURFACE PREPARATION AND METHOD OF
APPLICATION ... The business division "Reactive Polymers & Flame Retardants" of Schill+Seilacher "Struktol" GmbH, Hamburg, develops flame-retardant epoxy resin systems based on halogen-free, phosphorus-based flame retardants (FSM). A new, innovative solution has now been found to offer low-viscosity resin systems for easy processing in automated processes on the one hand, while at the same time meeting the stringent fire protection requirements on the other. The special feature of the surface coating lies in the specially coordinated combination of components, which allows the use of a resin matrix without flame retardant for processing in pultrusion and filament winding processes as well as in injection or hand lay-up processes, while meeting fire protection standards such as UL 94. Schill+Seilacher "Struktol" GmbH, Hamburg, develops flame-retardant epoxy resin systems based on halogen-free, phosphorus-based flame retardants (FSM). The special characteristics of these systems is based on the particularly fine-tuned of the components, which allows processing in pultrusion and filament winding as well as in injection or manual lamination processes. The systems can meet fire protection standards such as UL 94 or EN45455.

The Polyphlox® 3722 System has already been successfully tested for a battery housing in motor racing for the KIT19e by the Formula Student Team KA.RACE.ING. Both the required UL V-0 standard as well as high mechanical property level were achieved. The processing into a CFRP battery housing was also successful.

The advantage of the recently developed flame retardant epoxy systems is their compatibility with different hardeners, so that these systems can be flexibly adapted for different applications and processes. Adaptation for SMC moulding compounds is just as feasible as for prepreg systems. Advancements in tire technology are motivated by continually evolving market expectations. The need to contribute to vehicle efficiency, either by reduced fuel consumption in combustion engine vehicles or the switch to e-vehicle technologies with associated changes in tire performance criteria are often cited as key challenges facing tire developers.

Polymer producers have responded to the changing tire industry expectations, their innovations take into account a more reactive functionality within polymer architecture, and this is closely matched by increasingly greater degrees of filler surface chemistry. As a result, tire compound properties may now be tailored to meet quite specific tire performance targets.

These advancements however bring about their own conflicts, processing pathways involving multiple stages, often with the ability to rework compound or adjust rheological properties by additional time or energy input during the process are no longer viable options for most tire producers. It has thus become necessary to achieve processability through an increasingly narrow operating window.

The use of process additive chemicals in an attempt to overcome the processing limitations observed gives rise to further conflicts; Lubricant additives might improve compound surface appearance, however, green strength will probably further reduce due to the unwanted softening effect. The same is true for release additives where lower tack unfortunately remains at a higher value than the also lowered tensile strength of the compound.

The development team at Schill + Seilacher has recognised the need to decouple conflicting performance characteristics found within conventional process additive chemistries. As a result, innovation within our Struktol® range offers tire compounders opportunities to achieve processability without compromise.

An example of significant improvement in extrusion performance when using Struktol® HT 300 in a silica filled tread compound. This innovative Struktol additive acts to decouple the conflicting influences of green strength and viscosity. As a result, high performance compounds gain significant benefit.

Already as grammar school pupil Mr Chen discovered his affinity to science and technology and started afterwards his chemistry studies at the faculty of chemistry at Hamburg University, which he recently terminated with his master’s degree. His master’s thesis applies to aspects of sustainable polymer chemistry in context with redox initialised radical polymerisation. He worked out definite processes for production of high polymers with interaction of theoretical, synthetic and technological chemical approaches. Even his bachelor’s thesis had its focus on macromolecular chemistry. These experiences will surely be of use for his graduation. The aim of this research project is the treatment of zinc catalysed sulphur of allylic hydro carbon bondings in polyolefines. The oxidation of sulphur is a well-known process and even assumes a role for vulcanisation, however, structure reactivity relations on the impact of catalysts is lacking. The aim is to research a sustainable implementation on the basis of high active catalysts.

The studentship amounts to monthly 1,600 € for a period of two years and will be extended to three years after a positive expertise of an interim report. The studentship is promoted by Ingeborg-Gross-Stiftung and „Freundes- und Förderverein Chemie der Universität Hamburg e.V.“.

Since many years already Schill+Seilacher "Struktol" GmbH is a partner of Evonik for sales of their product VESTENAMER 8012. Lately Evonik has provided a new video explaining how to benefit of the use of VESTENAMER 8012 High temperatures and high pressures are applied as well as there is repeated flexing due to a high number of inflating and deflating cycles during the vulcanization cycles of the uncured tire.
This publication presents studies for a significant extension of the service-life of tire curing bladders. The beneficial use of Struktol's new plasticizer types is demonstrated. having received EcoVadis Gold Medal as a confirmation for successfully implementing and following sustainablility requirements in their processes. RubberTech China 2020, the leading international rubber technology exhibition, was held at the Pudong Exhibition Centre, Shanghai, China, from September 16 to 18. This was the 20th edition of the popular event, which usually draws a diverse crowd of attendees and participants from across the world. However, the COVID-19 pandemic and resulting travel restrictions had a significant impact on international attendance, as well as on the scale of RubberTech China 2020.

Representatives from Schill+Seilacher "Struktol" GmbH , the German specialty chemicals major, took part in the event and noted that the 2020 edition of one of the global rubber industry’s most popular fairs was unlike any others that preceded it.

The team from SS China remarked that the number of visitors to the event seemed to not have decreased significantly, but strikingly, there were almost no foreigners at the show compared to other years.

Members of the company’s team celebrated SS China’s 15th anniversary at a special dinner at a restaurant in Waitan, by the invitation of Schill+Seilacher "Struktol" GmbH, Hamburg, where a celebratory letter from Mr. Guido Robbe was read and the celebration was shared online with Mr. Colin Clarke.

Since today the Böblingen chemical enterprise provides the district with disinfectants

"First we just started with small quantities for our company requirements and without automatic support.“ reported Mirco Arnd, factory manager of Schill+Seilacher GmbH, Böblingen. „Since today, however, we produce larger quantities at our mixing plant with official approval. Schill+Seilacher especially provides medical and social facilities at the Böblingen district.

They produce a disinfectant called „Desinfekt OFL“ in accordance with the formulation of World Health Organization (WHO). Additionally, thanks to the glycerine portion Desinfekt OFL is also skin-friendly. „We provide our customers with disinfectants at a fair price“, reported Arndt. "This is our small and regional contribution in fight against the pandemic. For production of Desinfekt OFL we postponed parts of our own production in order to accomplish capacities for it."

Schill + Seilacher preferably delivers Desinfekt OFL in 5 liter units to hospitals, special homes for elderly, fire departments, doctor’s practices as well as social facilities. "We will start with about 5 tons of the disinfectant. As one of the required components for production is in short supply recently, we are only able to produce and provide a limited quantity. As soon as further supplies are guanranteed, we will increase production. We have already a lot of inquiries from all fields.“, said Mirco Arndt.

At the end of October, our managing director Dr. Ackermann joined the delegation group of Dr. Merkel to India.

At this journey, bilateral talks with various Indian industrial segments took place. The delegation’s journey was of high importance for Schill+Seilacher, because the Indian market is of great economic interest for our innovative company. At Chennai in India we already hold our own office and a subsidiary enterprise already is scheduled at Mumbai and Pune to satisfy this extremely important market and to provide best possible service.